A cousin of ours was visiting New York City for her work. When I asked her , what can we do together when we meet , she popped the idea of a NYC brunch ! While I am here for a little over 5 months, but I definitely don’t know this city , the way I know Bangalore. Immediately all the warm memories of those leisurely brunches sprang forth my eyes, especially Novotel and Marriott Whitefield !!

I had one and half day in hand but the big task was to find out the best option. The following day was spent in digging up as much as I could from all the YouTube videos, online info and I was so surprised!

Most of the places either offered one entree and sangrias or mimosas or some other cocktails. Some places offered one main and similar choice of beverages. Bottomless or unlimited as we understand in India ,meant an additional price apart from the entree or main course.Moreover, somewhere it was for 60 mins, somewhere else 90 mins or max 2 hours. It was really surprising for me. When we think of brunch in India , we think of leisurely hours , huge spread starting from the cold cuts , fruits, cheese etc till plethora of desserts , and here it’s so constrained.

Still after quite an extensive search we decided to meet at Añejo. There were two outlets, one in Tribeca and the other near Hells Kitchen. The later suited us best.Our booking was for 11.45 a.m. and we were there sharp on time .The place was quite packed , we chose a table with high stool chairs. The good part was, we could see people inside as well as the road outside the restaurant.

The moment we signalled that we were ready , the menu was served. Initially we were hesitant and deliberating, but within the next few minutes we declared that we will go for the #premiumbrunch .

The next 2 hours we kept getting food on the table course by course .We just kept finishing our drinks and ordering for the next round. As for the food, it was being served to the table one after the other ,without having to ask for it.

We started with the Traditional Guacamole which was served with salsa cuatro and spiced chips . 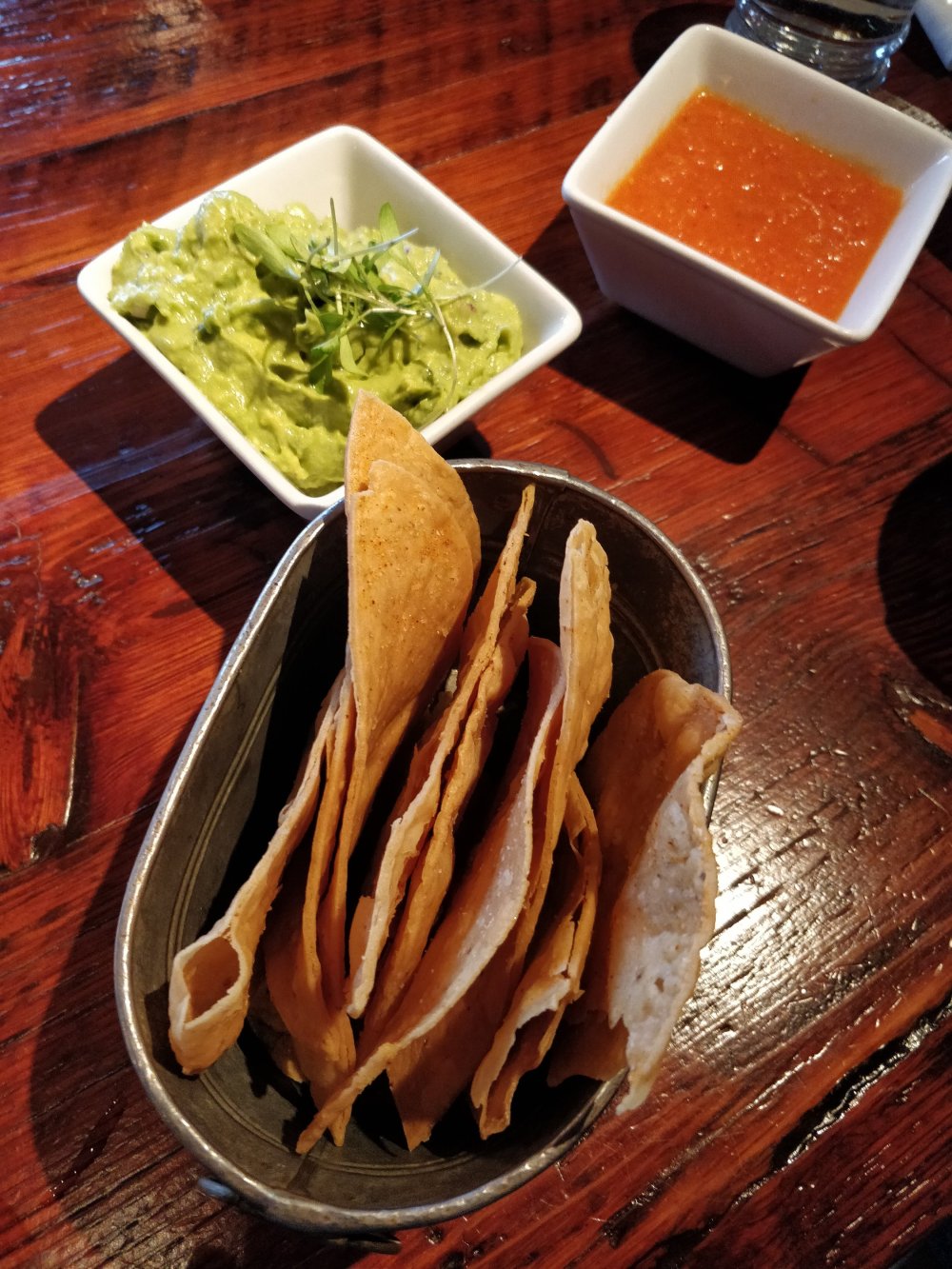 I asked for a Bloody Mary and was very happy to get my drink with the jalapenos and spiced rim. 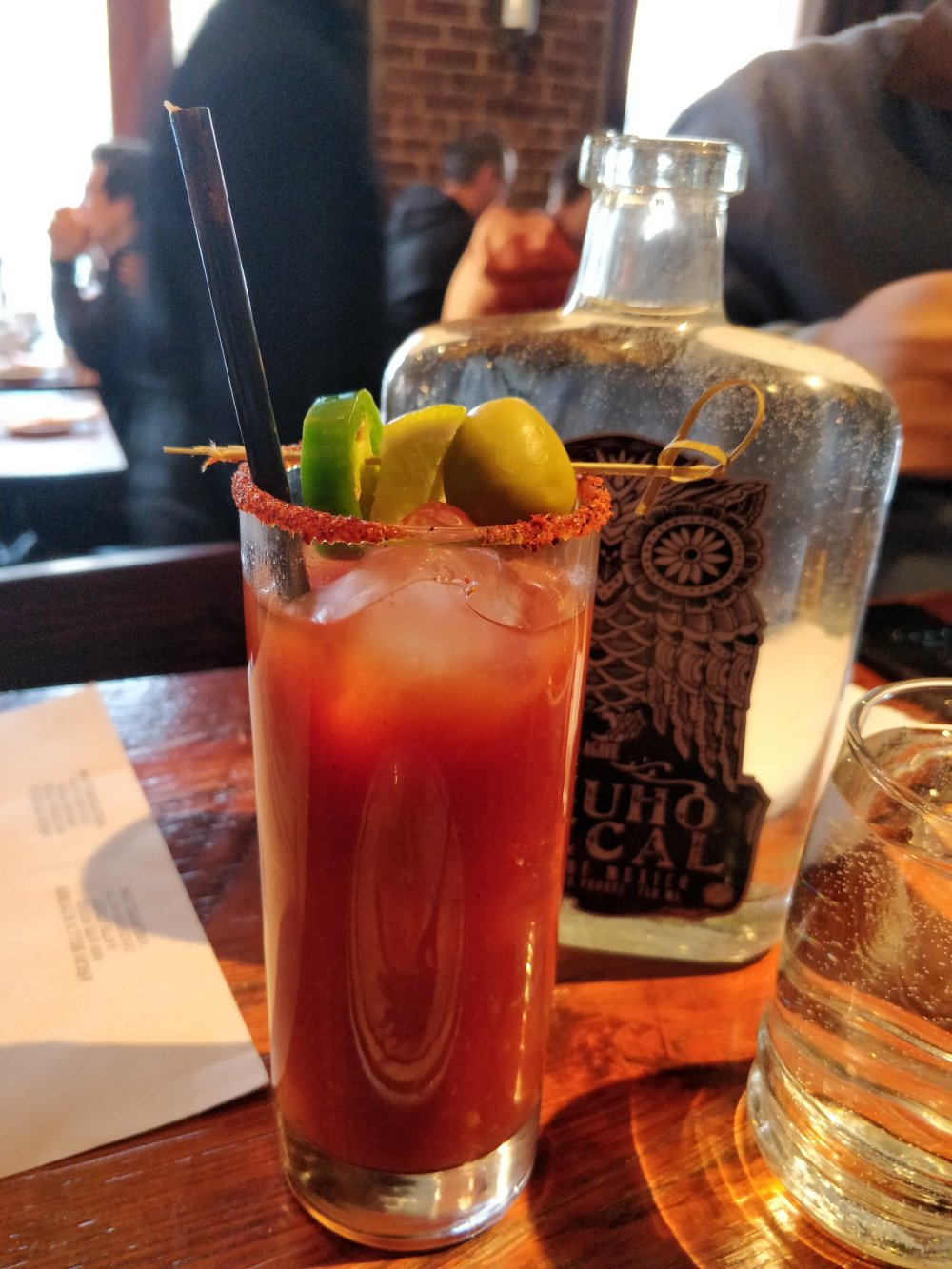 This was shared by all three of us and each component added to the taste. Following this we were served “chorizo home fries”, this was not like the usual way we have #chorizo , but as bengalis , how can we not like the potato fries (aloo bhaja) with chorizo and spices.

Then we were served with “huevos rancheros” (basically what we know as quesadellas ) and Applewood Smoked Bacon . 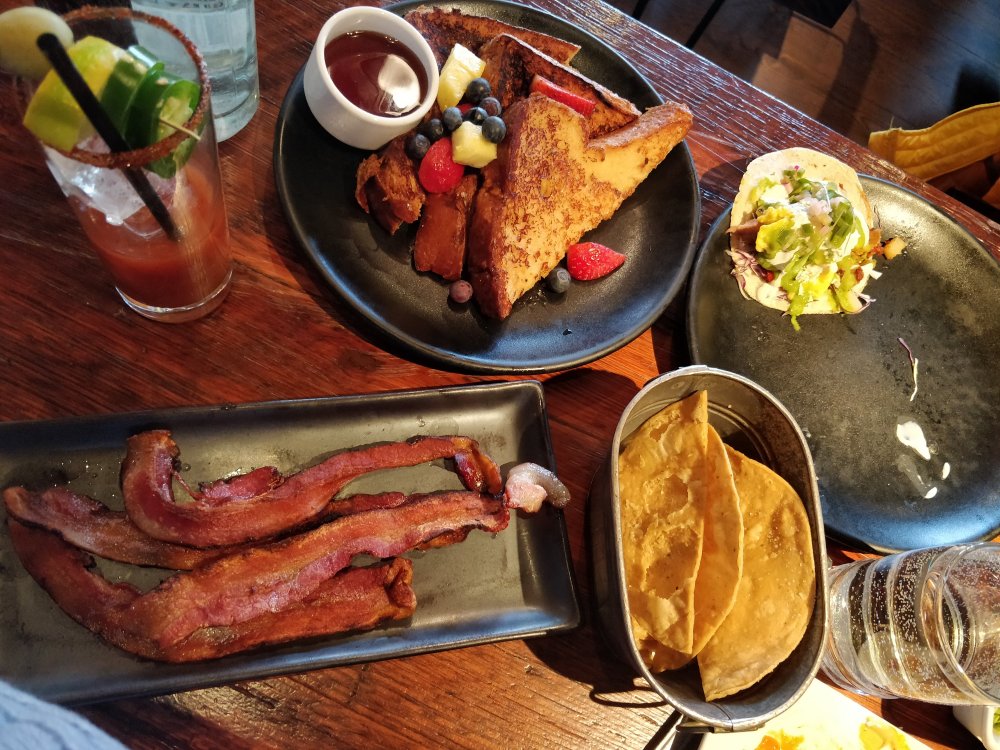 By now I had 2 glasses of Bloody Mary so I wished to change and we ordered for the Sangria and Mimosa. The Mimosa was super refreshing.

The Sangria was different from what we get in India, but gradually we acquired the taste and enjoyed it.

Soon the final dish was served on the table and I still can’t get over it . The french toast comprised of two thick slices of sourdough sprinkled with cinnamon sugar , fruits and dulce de leche on the side. 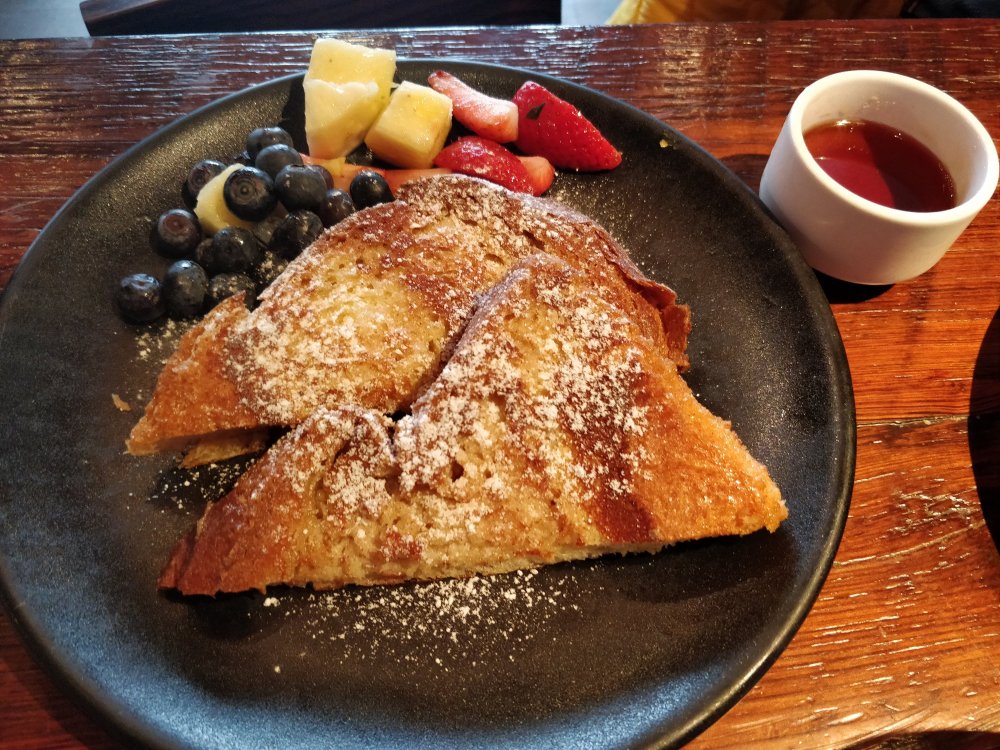 This is the only dish I couldn’t help re-ordering. 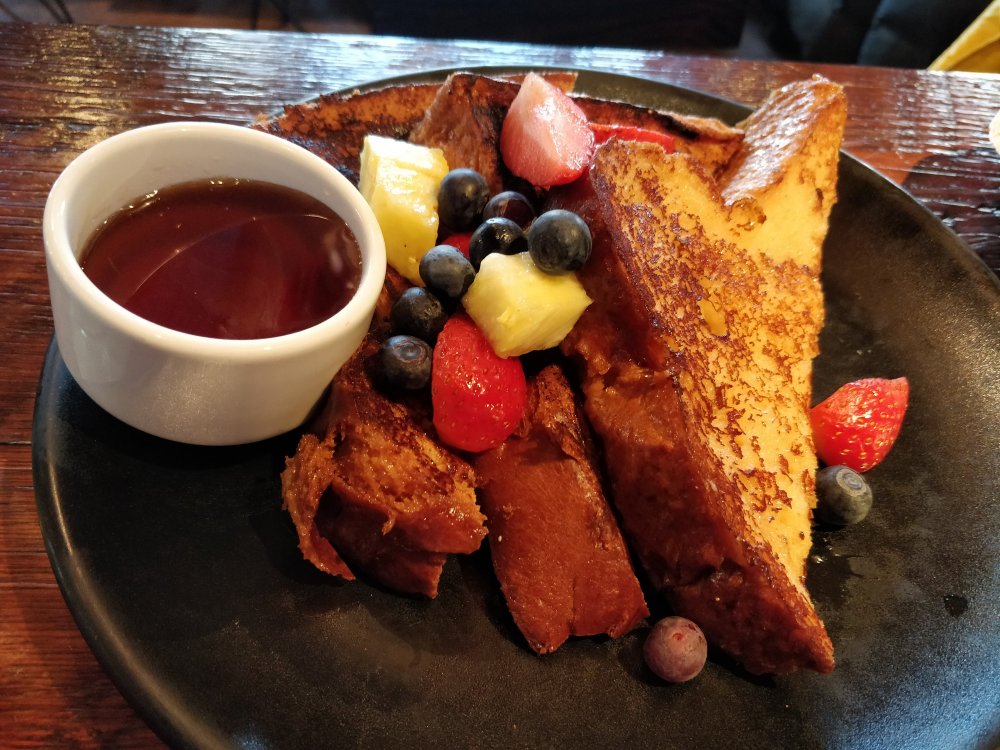 By this time we were too full , our time was almost nearing 1 hour 45 mins, they came and reminded us , so that in case we like to re-order something , they can get it.

I was super impressed by the hospitality, the timeliness, professional approach and promptness with which our waitress served us . She kept an eagle eye on the table , and a little before we are about to finish, she was by our side so that we don’t have to wait while the clock was ticking.

Not that many tables had opted for this kind of a lavish brunch. When food kept coming to our table another guy sitting in the adjacent table jokingly asked if he can join us , as there’s so much of food.

In fact once our time was over and we paid the bill, she politely asked if we want to move to the window seats, as our table was already booked for another big group. They helped us move all the food and we just switched over along with our drinks.

We spent the following 20-25 mins chatting , finishing our food , drinks while looking outside at the non stop New York traffic. 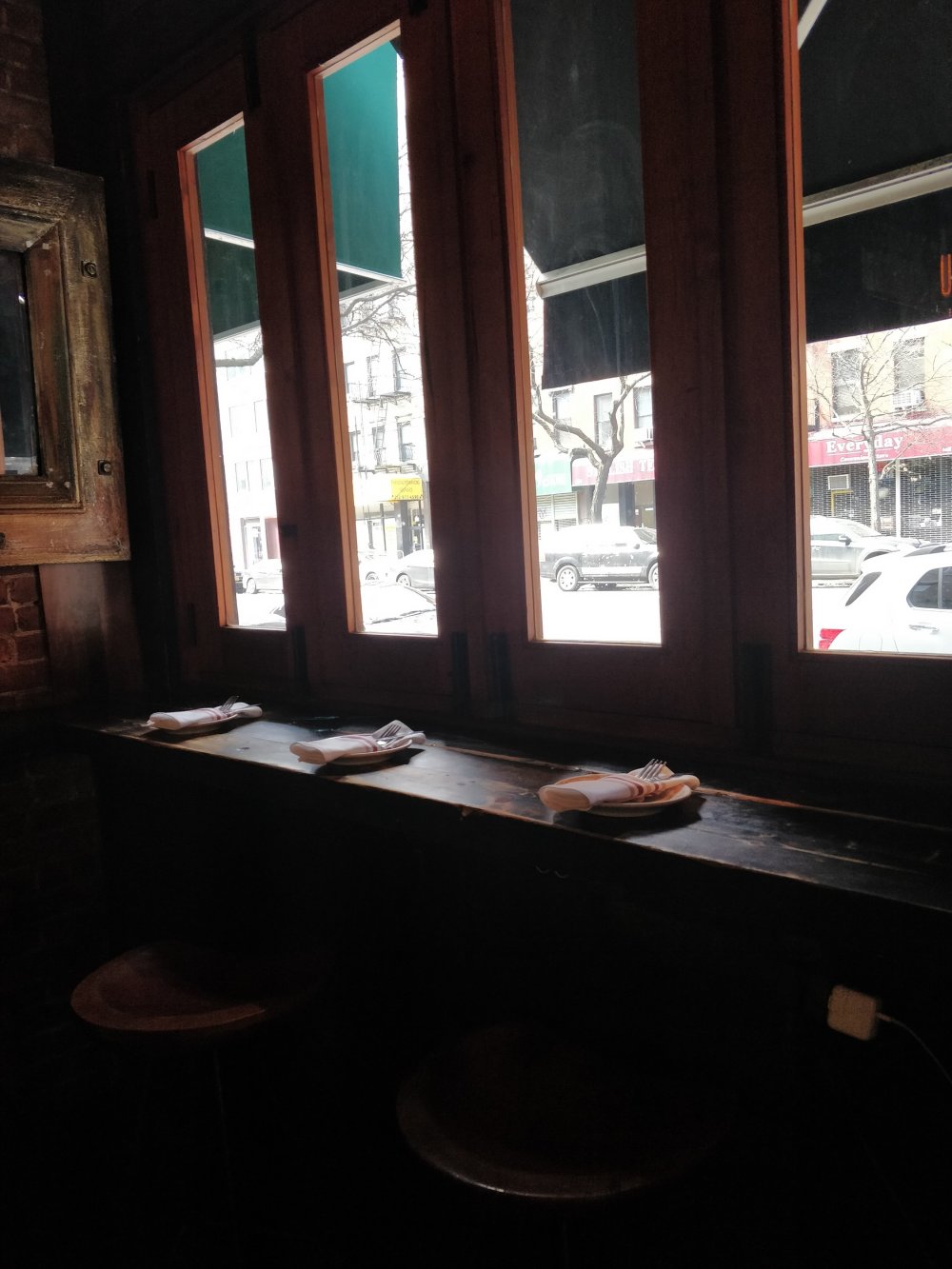 By the time we stepped out the initial fear of missing a Bangalore sort of lavish brunch absolutely vanished .I was extremely proud of all the time I spent over finding this place.